skip to main | skip to sidebar

JUST STOP FOR A WHILE AND SIGN UP MY GUEST BOOK 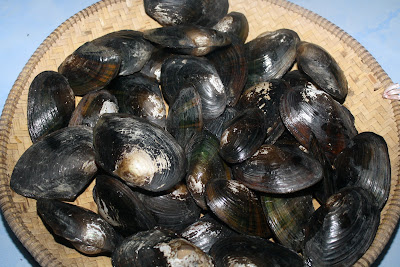 Polymesoda expansa
It's local name is lokan. It is a bivalves mollusc which is found buried in the stiff mud of the landward fringe of mangroves. It is well-adapted to this habitat, being able to tolerate long periods of low tide, and has the ability to resume filter-feeding rapidly when inundated.
at 3/19/2010 07:17:00 PM No comments: 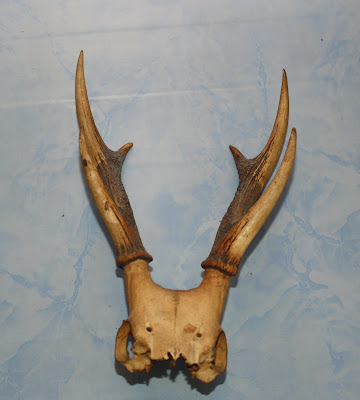 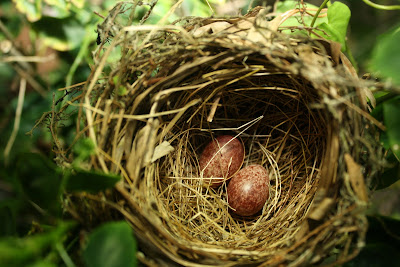 While clearing my compound, my son found this bird's nest with two eggs on one of the flower plants. According to my grand ma, if anybody disturb the bird's nest with eggs, the bird will no longer look after the eggs. It was true because after a week, the bird left the nest and the eggs were rotten. I warned my son not to disturb any bird's nest when the birds layed eggs in the future. 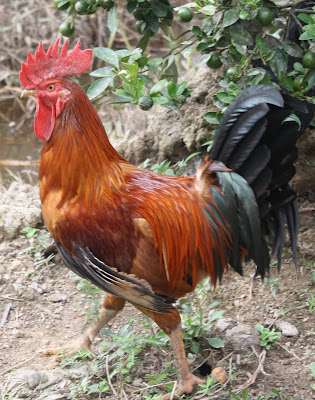 A rooster, also called a cock or chanticleer, is a male chicken (Gallus gallus) with the female being called a hen. Immature male chickens of less than a year's age are called cockerels. The oldest term is "cock," from Old English coc. It is sometimes replaced by the term "cockerel" (which properly refers to a young male chicken) in the United Kingdom and Ireland, and almost always by "rooster" (a relative neologism) in North America, Australia and New Zealand. "Cock" is in general use as the name for a male of other species of bird, for example "Cock sparrow." "Roosting" is the action of perching aloft to sleep at night, and is done by both sexes. In the United States, "rooster" is preferred due to sexual connotations with the word "cock". The rooster is polygamous, but cannot guard several nests of eggs at once. He guards the general area where his hens are nesting, and will attack other roosters who enter his territory. During the daytime, he often sits on a high perch, usually 4–5 feet off the ground to serve as a lookout for his flock. He will sound a distinctive alarm call if predators are nearby.

The rooster is often portrayed as crowing at the break of dawn and will almost always start crowing before 4 months of age. He can often be seen sitting on fence posts or other objects, where he crows to proclaim his territory.

However, this idea is more romantic than real, as a rooster can and will crow at any time of the day. Some roosters are especially vociferous, crowing almost constantly, while others only crow a few times a day. These differences are dependent both upon the cock's breed and individual personality.

He has several other calls as well, and can cluck, similar to the hen. Roosters will occasionally make a patterned series of clucks to attract hens to a source of food, the same way a mother hen does for her chicks.

A capon is a castrated rooster. Unlike most other male birds, roosters have a small penis to facilitate mating. In the caponization procedure, the bird's testes are completely removed; a surgical procedure is required for this as the rooster's sexual organs are internal. As a result of this procedure, certain male physical characteristics will experience stunted development:

The comb and wattles cease growing after castration, giving a capon's head a dwarfed appearance.

Caponization also affects the disposition of the bird. Removal of the bird's testes eliminates the male sex hormones, lessening the male sex instincts and changing their behaviour: the birds become more docile and less active and tend not to fight.

This procedure produces a unique type of poultry meat which is favoured by a specialized market. The meat of normal uncastrated roosters has a tendency to become coarse, stringy and tough as the birds age. This process does not occur in the capon. As caponized roosters grow more slowly than intact males they accumulate more body fat; the concentration of fat in both the light and dark areas of the capon meat is greater than in that of the uncastrated males; overall, it is often thought that capon meat is more tender, juicy, and flavorful than regular chicken.

In China, the Yangbi Huang breed can grow to be the largest rooster in the Asian continent, up to 35 cm long. This is thought to be caused by the castration of the roosters practised by farmers in Northern China, which affects the hormonal balance called a cockpit between two gamecocks. Gamecocks are not typical farm chickens. The roosters are specially bred and trained for increased stamina and strength. The comb and wattle is cut off of a young gamecock because if left intact, it would be a disadvantage during a match. This process is called "dubbing." Sometimes the roosters are given drugs to increase their stamina or thicken their blood, which increases their chances of winning. Cockfighting is considered a traditional sporting event by some, and an example of animal cruelty by others and is therefore outlawed in most countries.[3] Usually wagers are made on the outcome of the match, with the surviving or last-bird-standing being declared the winner.

Some more aggressive cockerels will drop and extend both wings and puff out all their body feathers to give the hens and/or other roosters the impression of a larger size, and charge through the hen yard like a bull.

The cockerel was already of symbolic importance in Gaul at the time of the invasion of Julius Caesar and was associated with the god Lugus.Today it is an emblem of France and Wallonia and Denizli.

The fighting cockerel on a ball is the symbol for Tottenham Hotspur Football Club. The cockerel wears a pair of spurs which is a reference to the club's nickname. It has been present on their crest and shield since 1901. Additionally, the cockerel is the emblem of Turkish sports club Denizlispor, which was founded in 1966. Also, the supporters of the club are called cockerels. 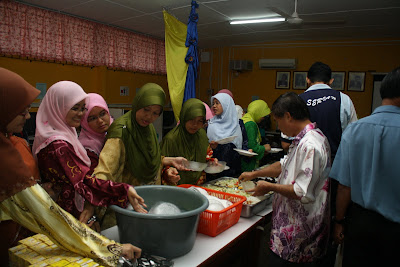 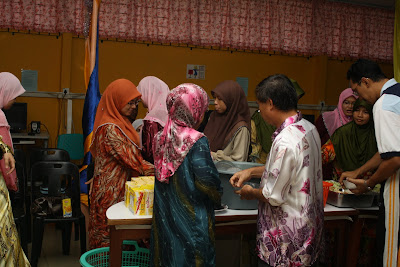 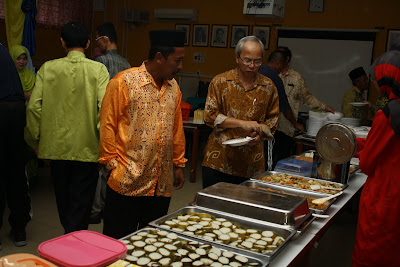 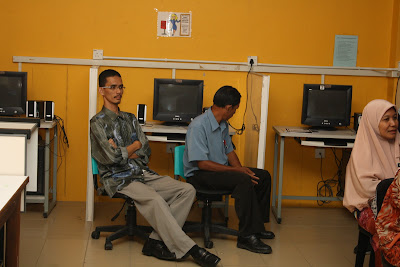 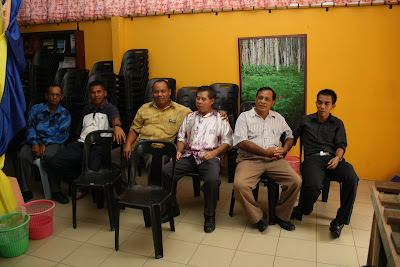 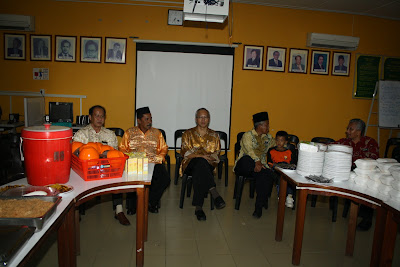 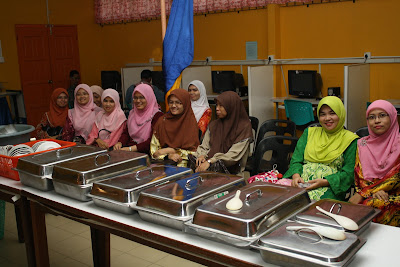 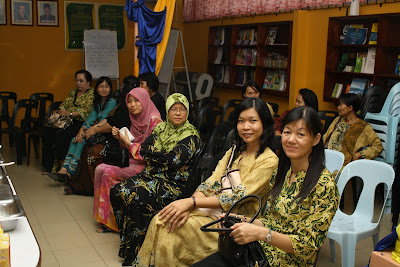 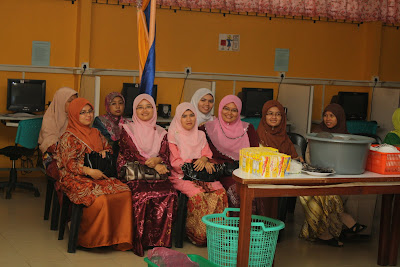 ASSALAMUALAIKUM,
THESE FEW DAYS, I'M QUITE BUSY. I HAVE TO PREPARE THE ATHLETES' NUMBER PLATES AND THEIR CARDS. BY YESTERDAY, EVERYTHING WAS COMPLETED. I'D LIKE TO RTHANK ALL MY COMMITTEE MEMBERS FOR THEIR EFFICIENT AND FAST JOB. TEY CAN DO THEIR TASKS IN TIME.
LAST NIGHT I SORTED OUT THE CARDS AND TODAY I'M GOING TO DISTRIBUTE THEM TO THE HOUSE MASTERS.
THE STAF COMMITTEE ORGANISE A CHINESE NEW YEAR LUNCH HELD AT ACCESS CENTRE. THE LUNCH WILL START AT 11.00 AM TILL 2.00 PM.
at 3/04/2010 08:01:00 AM No comments: 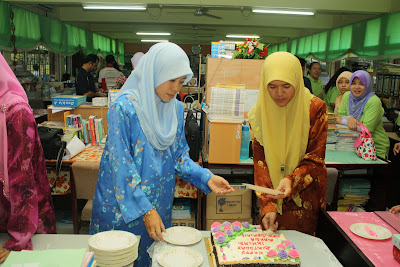 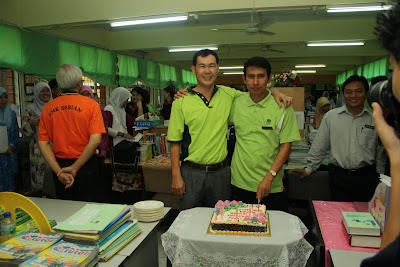 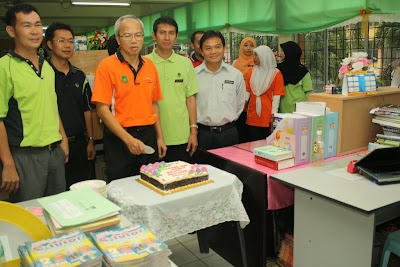 The staff Committee organised a simple birthday gathering to our colleagues as follows:

The Prophet Muhanmad's Birthday Celebration - procession
Assalamualaikum,
I am very sorry for not keeping my promise.
yedsterday, I promised to publish the result of the Quranic Recital, Speech and Story Telling competetion which was held at SMK Serian. Unfortunately, all the result was sent directly to the PPD office. The Price giving ceremony will be held at the Mini Stadium Serian in conjunction with the Prophets Muhammad Birthday Celebration. The celebration would include procession, banner competition and followed by speeches by distinguished guests and the pizes will be given for all the winners of the best contingent, The winners of the yesterday's MTQ and the winners of banner competion.
This year, the Prophet Muhamad's Birthday Celebration is organised by The Serian District Education Office.
at 2/23/2010 12:23:00 PM No comments: 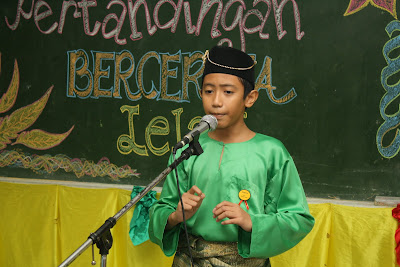 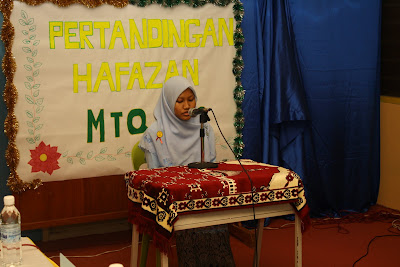 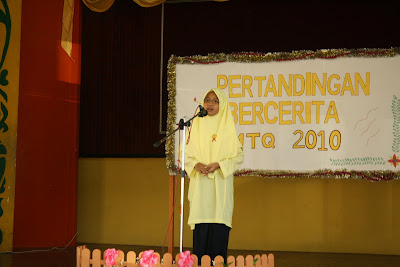 WHAT'S UP TODAY?
INTER-SCHOOL DISTRICT LEVEL QURANIC RECITAL, RELIGIOUS SPEECH COMPETITION, STORY-TELLING IS HELD TODAY AT SMK SERIAN.
PARTICIPANTS FROM VARIOUS SCHOOLS IN SERIAN DISTRICT TOOK PART IN THE ABOVE-MENTIONED COMPETITIONS. THE PROGRAMME WENT ON SMOOTHLY UNTIL NOON. DETAILS OF THE RESULT WILL BE PUBLISIHED TOMORROW.
at 2/22/2010 09:33:00 PM No comments:

relax for a while- feed my fish

Time and tide wait for no man